(CNN)On her day off from working at a Covid-19 unit in an Arizona hospital, ICU nurse Lauren Leander threw on a pair of clean scrubs and headed to an anti-lockdown protest at the state Capitol. She was determined to be a voice for her patients through silence.Leander, a Banner Health nurse of five years, joined an intimate group of healthcare workers on Monday to counter protest at the Capitol, where people gathered to urge the governor to reopen the state.Standing up straight, her arms crossed and face mask on, Leander stood on the Capitol steps, with a handful of healthcare workers lined up by her side. She said she only spoke if someone encroached on her personal space, despite people raising their voices at her.”It was heated, people were very fired up about what they had to say,” she said. “A lot of the top comments we got were about us being fake nurses, there was a huge majority of them that still believe this virus is fake, that it’s a hoax and not real at all. They were convinced that we’re fake nurses and that’s why we weren’t talking.” Arizona Gov. Doug Ducey has put a stay-at-home order in place until April 30. Because of this, several different groups of rallied at the Capitol to say the economy has suffered enough and the order needs to be lifted, according to CNN affiliate KNXV. 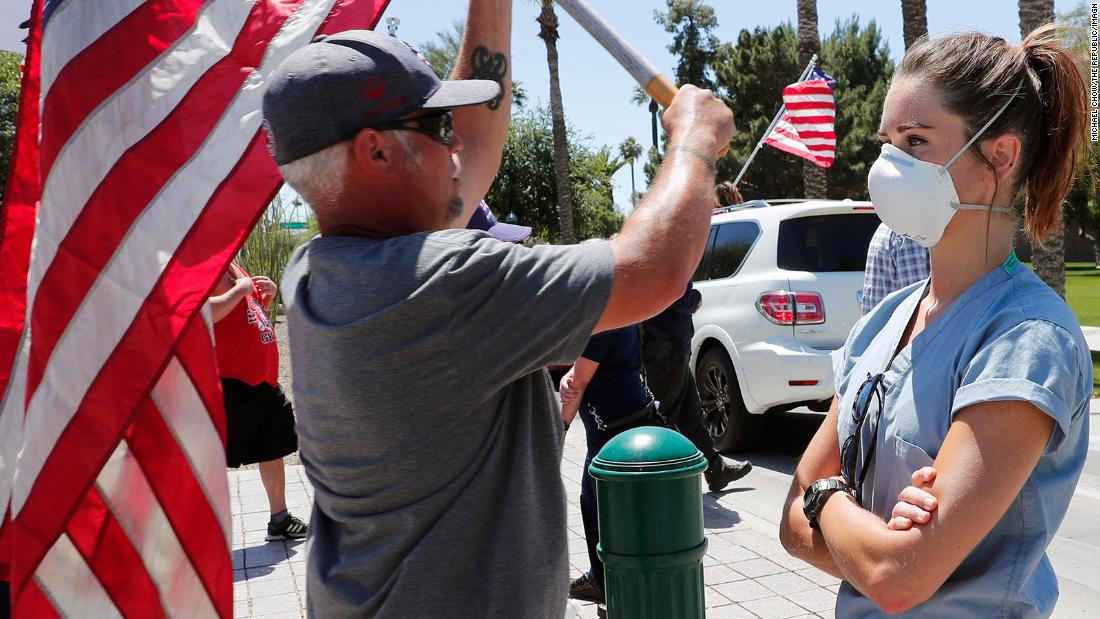 ICU nurse Lauren Leander attended protest in support of fellow healthcare workers and coronavirus patients. Michael Chow/The Republic/ImagnLeander told CNN she volunteered to work in the hospital’s Covid-19 unit full time and has been seeing patients from all over the state for the last month.https://9a3aa20e1aac5308b2246d0a938f6606.safeframe.googlesyndication.com/safeframe/1-0-37/html/container.html”I just hope people see that nurses are not the enemy and we’ll take care of them one way or the other,” Leander said. “I don’t care if you believe in this virus or not or truly what your opinion is of it, if these people show up in my ICU we will take care of them one way or another.”

The power of silence

After seeing photos and video Sunday of people at a rally in Denver, Colorado, demanding the state reopen and ease restrictions designed to slow the spread of coronavirus, Leander said she was inspired and wanted to stand up in support of her fellow healthcare workers. After seeing a Facebook post about Monday’s rally, Leander said she texted a few of her colleagues and headed there.

Preliminary antibody testing in New York suggests much wider spread of coronavirusLeander and the few other nurses, from other hospitals, stood in silence at the “Patriots’ Day Rally” at the Capitol where nearly 1,000 people gathered, according to KNXV. “This isn’t about politics, choosing sides, this virus does not discriminate at all,” she said. “It’s taking lives from one end of the spectrum to another. I know it’s wishful thinking but I just would love if we just had that common ground with fighting this virus.”Leander said right now the public needs to be listening to the experts who are studying this virus. Even as nurses, they’re relying on science to guide them. “Our main message was that we wanted healthcare workers’ voices to be heard louder than misinformation and fear,” Leander said. “There will be a calm and controlled manner to reopen our economy and our state…you don’t open the flood gates and release everyone at once.”

Photos from the rally in Denver caught the attention of many on social media, including former Arizona state Sen. Dr. Kelli Ward, who challenged Sen. John McCain in the Republican primary in 2016.https://9a3aa20e1aac5308b2246d0a938f6606.safeframe.googlesyndication.com/safeframe/1-0-37/html/container.htmlWard tweeted Tuesday morning, questioning the authenticity of the healthcare workers who attended and calling the movement propaganda.”EVEN IF these ‘spontaneously’ appearing ppl at protests against govt overreach (sporting the same outfits, postures, & facial expressions) ARE involved in healthcare – when they appeared at rallies, they were actors playing parts #Propaganda #FakeOutrage,” Ward tweeted.

40 states and Washington, DC have ordered or recommended that schools don’t reopen this academic yearCNN has reached out to Ward for comment.After hearing about Ward’s tweet, Leander said if given the opportunity she would walk her through the ICU at her hospital to the bedside of some of her coronavirus patients to see firsthand the impacts of the virus. “I wish she could be in my shoes for a day, I’d have her put on a pair of scrubs and walk with me,” Leander said. Leander has not seen any of her family members since she’s been working in the Covid-19 unit. And although that lost time has been tough, what she’s been experiencing in the hospital is tougher. “A human being having to pass away via FaceTime because their family is not allowed in the hospital during this crisis, it’s the most heartbreaking thing you will ever see,” she said.A few days ago, Leander said she had a patient grab her hand and say, “Please tell me I’m not going to die here.”While Leander knows better days are ahead, she said it doesn’t take away from the reality that there are people impacted and suffering right now.