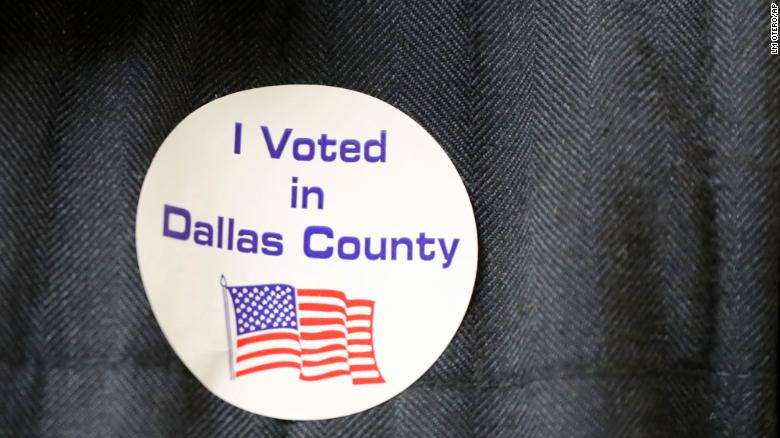 Washington, DC (CNN)A Texas judge on Friday ruled that all registered voters in the state should be allowed to request and use mail-in ballots due to the coronavirus pandemic.District Judge Tim Sulak, in a ruling filed Friday in Travis County, issued a temporary injunction that eases the definition of “disability” in Texas’ vote-by-mail provision, making it apply to all registered voters who fear for their health in casting ballots in person for the state’s upcoming elections.Texas’ election code defines “disability” as “a sickness or physical condition that prevents the voter from appearing at the polling place on election day without a likelihood of needing personal assistance or of injuring the voter’s health.” Voters who meet this definition and wish to vote by mail must submit applications.Sulak acknowledged during a court hearing on Wednesday that he expects an appeal from the state attorney’s office, which has issued guidance that fear of Covid-19 does not qualify as a disability.”Moreover the evidence shows that voters and these Plaintiffs … are reasonable that voting in person while the virus that causes Covid-19 is still in general circulation presents a likelihood of injuring their health, and any voters without established immunity meet the plain language definition of disability thereby entitling them to a mailed ballot,” the order read.In late March, Gov. Greg Abbott postponed dozens of election runoffs statewide for party nominations to congressional and local offices, set for May 26, until July 14. The new date was made to coincide with a competitive special election for a Texas state Senate seat. In issuing the delay, Abbott didn’t weigh in on whether to expand mail-in voting access.In a separate ruling on Friday, Sulak also aligned the dates for early voting for the special election and the runoff to July 6-10.The Texas Democratic Party, the original plaintiff in the case, rushed to declare victory after leaving court on Wednesday, in anticipation of the court ruling in their favor. The group argued that Covid-19 posed a significant health threat to voters if they were forced to cast ballots in person.”We cannot allow this public health crisis to be the death of our democracy when it is taking so many of our loved ones,” Texas Democratic Party Chair Gilberto Hinojosa said in a press release.”Our state is better off when more Texans participate in our democracy. Voting by mail is safe, secure, and accessible. It allows more voters to participate in our democracy, and it’s a commonsense way to run an election, especially during a public health crisis,” Hinojosa added.”We just won a preliminary injunction in Texas. All voters get to vote by mail in the primary. No individualized excuses necessary. The coronavirus is a universal excuse. GREAT WORK,” David Cole, national legal director for the ACLU, said Wednesday in a Twitter post.In response, Texas Attorney General Ken Paxton, in a statement late Wednesday, expressed disappointment, saying in part that the district court had ignored the plain text of the state election code in order to allow healthy voters to take advantage of special protections made available to Texans with illnesses or disabilities.”This unlawful expansion of mail-in voting will only serve to undermine the security and integrity of our elections and to facilitate fraud. … My office will continue to defend Texas’s election laws to ensure that our elections are fair and our democratic process is lawfully maintained,” Paxton, a Republican, said in the statement.The Texas state attorney’s office, in response to the court ruling, filed a notice of appeal late Friday.